It was in the late 1930s that Paramahansaji became interested in a parcel of vacant land on Sunset Boulevard in Hollywood.  Since coming to America in 1920, he had completed fifteen years of nearly ceaseless travel, conducting lectures and class series on yoga for hundreds of thousands in America’s largest cities.  Now he was concentrating his time on his writings and on classes for serious students of his teachings.

“I am not interested in building huge edifices of stone wherein God is absent,”  he said.  “We should have many small temples filled with a true spirit of devotion for God and of united seeking of God.”

With generous donations from devoted followers, he was able to purchase the Hollywood property for development as a spiritual center. 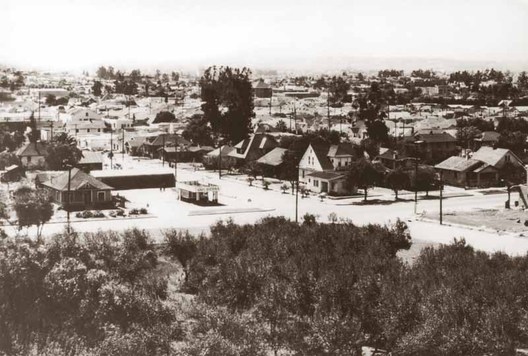 Never one to be balked by outer hindrances, the Guru undertook to materialize his plans for a temple in Hollywood during the dark years of World War II.  In the course of several talks Paramahansaji recounted part of the story:

“Some money had been given, and I wanted to use it to build a church here in Hollywood.  But I saw that it would be very difficult to build one during these hard times.  I prayed: 'Lord, You have to show me to some church that I can move to this property on Sunset Boulevard.'

“Soon after, I was sitting on the sunporch of the headquarters at Mt. Washington, when I saw a little plaster fall off the building.  I said to myself, ‘I shall fix it up,’  but suddenly I saw in my mind’s eye termites everywhere.  I couldn’t believe it; and I said, ‘Lord, how cruel!  All the money I have saved for a church in Hollywood will have to be spent to rid Mt. Washington of termites!’  The Lord made no reply.

“But later, who calls me up on the phone but one of my friends who is a lawyer.  ‘Have you any use for a church?’ he asked.  ‘One of my clients has bought an estate and there's a small church on it.’

“So it was the Lord who saw to it that we got a temple here in Hollywood.  I had no money to build with; it was used in repairing Mt. Washington.  But we were able to get this little church for very little money, and now you see how beautiful it is.” 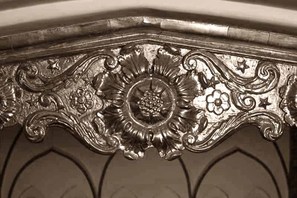 When Paramahansaji acquired the building, the interior was only roughly finished.  After having it transported to Hollywood, he personally supervised the extensive remodeling efforts, remarking: "If theaters can be made so ornate and attractive in order to entice people to material amusements, God's church should be even more lovely, because He is the essence of all beauty in the universe."  The altar and speaker's platform were framed in exquisite gold-leafed wood carving of original design, which strikingly complemented the deep blue drapes and carpeting and the pure white walls.  Stained glass windows and dome added to the beautifully unique appearance of the temple.

Much of the work was done by the monks and nuns of the Self-Realization Fellowship Order.  Brother Bhaktananda told the story of how the temple's beautiful stained glass windows were acquired:

"One day the contractor asked Paramahansaji, 'What kind of windows do you want?  What kind of door?'  The Guru didn't have any instructions for him at the moment.  However, in the morning he called me on the intercom and said, 'Get in the pickup truck and follow my car.  Divine Mother is going to give us stained glass windows.'  So I followed his car.

"When we arrived at the building-supply yard, Guruji asked a salesman, 'Do you have stained glass windows?'  The man said, 'No, I have worked here four years and I have never seen any.  I'm sure we don't have any.'  But Guruji persisted.  'Will you please go to the office and see if anyone there knows anything about stained glass windows?'  The man went to the office.

"In the meantime the Guru started walking down one of the aisles, and we followed him.  He paused, and began to pick curiously at one of the piles, thick with dust and dirt.  He was still there when the yardman returned and said, 'We don't have any.  No one knows anything about stained glass windows.'

Guruji said, 'What is back in this pile?'  The man began to scrape the dirt away.  A one-inch thickness of clay came off, and the yardman said, 'Yes, there is such a window here.'  Out of that pile came all the stained glass windows for the Hollywood Temple -- big ones, little ones -- from a supply yard that had no stained glass windows!  But as Guruji had said: 'Divine Mother is going to give us stained glass windows.'" 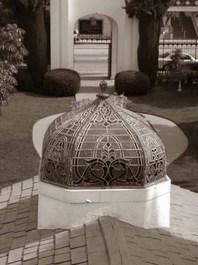 The lovely stained glass dome over the foyer had been acquired by Paramahansaji some years before.

Rajarsi Janakananda had purchased for Self-Realization Fellowship a small hotel that was adjacent to the Encinitas hermitage grounds.

When the owner gave Paramahansaji a tour of the building, the Master noticed a lovely stained glass dome sitting on a large table in the sitting room.

Paramahansaji said. "This dome comes with the hotel, doesn't it?  Otherwise I'm not buying it."  The owner agreed that he could have it.  the Master then turned to some of the disciples who were with him and said, "A temple is going under this dome." 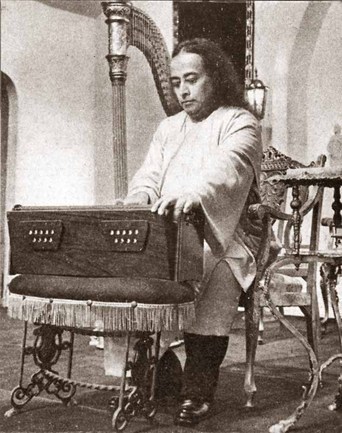 The physical beauty of the temple was only part of its attractiveness.   Far more significant was the powerfully uplifting spiritual vibration created there by the presence of a God-realized master.

Mukti Mata, who became a disciple of Paramahansaji in 1945, recalled her first visit to Hollywood Temple:

"As soon as I went inside, I felt the unique atmosphere, the peace, which was very tangible.  I said to the friend who had accompanied me:  'I have been in churches before.  But this is the first real church I have been in.'

"As Paramahansaji spoke, the vibration of his presence filled the whole temple.  It was not just that he was a powerful speaker, he was Power itself -- a divine power that awakened in your own soul a blissful consciousness of God's presence that had been there all along, but which you hadn't known about."

In the years following the temple's dedication on August 30, 1942, Paramahansaji regularly conducted Sunday services at the Hollywood Temple every other week (alternating with the San Diego Temple he established in 1943).

For the Guru, a typical Sunday would include the morning lecture service, an afternoon class on the Yoga Sutras of Patanjali, and an evening meditation service.  Most Sundays he would invite a different group of devotees from the congregation to join him for an Indian-style luncheon prepared by the ashram disciples.  In addition to these activities, the Master spent hours each Sunday, often until late in the evening, giving personal interviews to the many who came for his counsel. 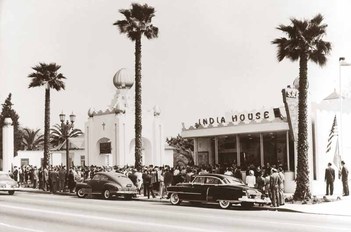 India Center was built adjacent to the temple during 1950-51 by monks of the Self-Realization Fellowship Order under the Guru's direction.

With the temple as its nucleus, the Hollywood ashram was expanded to include an auditorium (India Hall), living quarters for resident monastics, meditation gardens, and a vegetarian restaurant.  (The restaurant operations were discontinued in 1969.)

India Center was formally dedicated by Paramahansaji on Sunday, April 8, 1951.  The following are photos from that event.

Hollywood Temple continues to play a unique role in Paramahansaji's worldwide work.  Under the guidance of Meera Mata, Brother Bhaktananda, and other direct disciples of the Guru, a very active lay disciple group has grown up at the center, whose members serve in many ways to further the spiritual and humanitarian work of Paramahansa  Yogananda.

Many of these dedicated souls have moved from distant parts of the country (as well as from abroad) to the neighborhood surrounding the temple, in order to participate in the wonderful sense of spiritual community that has flowered here.

As the oldest existing Self-Realization Fellowship Temple in America, the Hollywood Temple has served and will continue to serve as an example for countless SRF centers all over the world, striving to embody the ideals the Guru expressed when he said:

"The true basis of religion should be a science that all devotees may apply in order to reach our one Father-God.  Yoga is that science.  The practice of a science of religion is imperative."