About our Guru, Paramahansa Yogananda 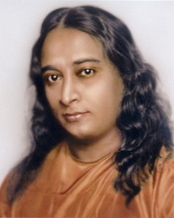 Paramahansa Yogananda was born in India in 1893.  In the hundred years since his birth, this beloved world teacher has come to be recognized as one of the greatest emissaries to the West of India's ancient wisdom. His life and teachings continue to be a source of light and inspiration to people of all races, cultures and creeds.   It was in 1910, at the age of 17, that he met and became a disciple of the revered Swami Sri Yukteswar Giri. After Yogananda graduated from Calcutta University in 1915, he took formal vows as a monk of India's venerable monastic Swami Order. It was this time he received the name Yogananda (signifying bliss, ananda, through divine union, yoga). His ardent desire to consecrate his life to the love and service of God thus found fulfillment. In 1920, Yogananda traveled to America where he founded Self-Realization Fellowship to disseminate worldwide his teachings on India's ancient science and philosophy of Yoga and its time-honored tradition of meditation.

Yogananda emphasized the underlying unity of the world's great religions, and taught universally applicable methods for attaining direct personal experience of God. To serious students of his teachings he introduced the soul-awakening techniques of Kriya Yoga. Kriya Yoga is a sacred spiritual science originating millenniums ago in India. Kriya Yoga was lost in the Dark Ages and revived in modern times by his lineage of enlightened masters. In 1935 his guru, Swami Sri Yukteswar, bestowed on him India's highest spiritual title, Paramahansa. Literally "supreme swan" (a symbol of spiritual discrimination), the title signifies one who manifests the supreme state of unbroken communion with God.

On March 7, 1952, Paramahansa Yogananda entered mahasamadhi, a yogi's final conscious exit from the body at the time of physical death.

To learn more about the inspiring life of our Guru we recommend you read his renowned spiritual classic, Autobiography of a Yogi.